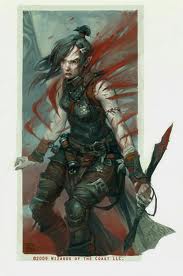 Dagger (Standard; at-will)
+9 vs AC, 1d4+7 damage
Combat Challenge (Immediate Interrupt; at-will) ✦ Martial, Weapon
Effect: Whenever an enemy marked by Xia is adjacent to Xia shifts or makes an attack that doesn’t include her, Xia can make a Melee Basic Attack against that enemy.

Cleave (Standard; at-will) ✦ Martial, Weapon
+10 vs AC; 1d6+9 damage, and an enemy adjacent to Xia other than the target takes 3 damage (Strength mod). Cruel Cut (Feat): If no other enemies are adjacent to the target when Xia hits the target with this power, the primary target takes ongoing 2 (Wisdom mod) damage (save ends).

Riposte Strike (Standard; at-will) ✦ Martial, Weapon
Requirement: Xia must be wielding a light blade. +11 vs AC; 1d6+10 damage, and if the target attacks Xia before the start of her next turn, Xia can make her riposte against the target as an immediate interrupt: +10 vs AC; 1d6+9 damage.

Clever Strike (Standard; at-will) ✦ Martial, Weapon
Requirement: Xia must be wielding a light blade. +11 vs AC; 1d6+9 damage. Special: If an ally is adjacent to the target and is able to attack it, Xia has Combat Advantage against the target for this attack.

Duelist’s Prowess Attack (Immediate Interrupt; at-will) ✦ Martial, Weapon
Requirement: The Duelist’s Prowess must be active in order to use this power. Requirement: Xia must be wielding a light blade. Trigger: An enemy adjacent to Xia attacks her. +11 vs AC; 1d6+10 damage.
Pass Forward (Move; at-will) ✦ Martial
Effect: Xia picks an adjacent enemy and moves up to her speed. As long as she ends her movement in a square adjacent to that enemy, her move does not provoke opportunity attacks from that enemy.

One-Two Punch (Standard; encounter) ✦ Martial, Rattling, Weapon
Requirement: Xia must be wielding a light blade. +11 vs AC; targets 1 or 2 creatures; 1d6+6 damage. If Xia hits both targets, she can deal her Sneak Attack damage to each target instead of just one.

Parry and Riposte (Immediate Reaction; encounter) ✦ Martial, Weapon
Trigger: An enemy misses Xia or an ally - within melee reach of Xia- with a melee attack. +10 vs AC; 1d6+9 damage, and the enemy grants combat advantage to Xia and her allies until the end of Xia’s next turn.
Duelist’s Prowess (Minor; daily) ✦ Martial, Stance
Effect: Until the stance ends, each time an enemy hits or misses Xia, she can use the Duelist’s Prowess Attack power against it..
Short Sword of Wounding +1
Property: When an attack with this weapon deals untyped ongoing damage, the target of the attack takes a penalty to the saving throw equal to this weapon’s enhancement bonus. . Power (Daily): Free Action; Use this power when Xia hits with this weapon. The target also takes ongoing 5 damage (save ends).
Repulsion Leather Armor +2
+4 AC Enhancement: +2 AC Power (Daily): Minor Action; Whenever an enemy moves into an adjacent square, Xia can push that enemy 1 square as an immediate reaction. This power lasts until the end of the encounter.
Amulet of Double Fortune +1
Property: When Xia scores a critical hit, she can make a saving throw against one effect that a save can end. She gains an item bonus to that saving throw equal to the item’s enhancement bonus (+1).
Iron Armbands of Power (Heroic Tier)
Property: Xia gains a +2 item bonus to melee damage rolls.
Alignment Unaligned; Languages Common
Skills Acrobatics +11, Endurance +7, Intimidate +7, Perception +9, Stealth +11, Thievery +11
Feats Hybrid Talent, Cruel Cut Style, Weapon Focus (Light Blade), Backstabber
Equipment Short Sword of Wounding +1, Short Sword, Dagger (4), Leather Armor of Repulsion +2; Amulet of Double Fortune +1; Iron Armbands of Power, adventurer's kit; Thieves' kit; 113gp
Rituals none

Retrieved from "https://leb.fandom.com/wiki/LEB:PC:_Xia_Xiong_(bogologo)?oldid=9144"
Community content is available under CC-BY-SA unless otherwise noted.