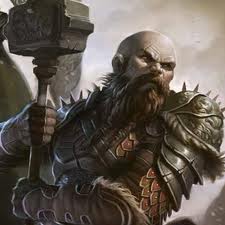 Warden's Fury (Immediate Interrupt; at-will)
Trigger: An enemy marked by Brondin makes an attack that does not include Brondin as a target. +12 vs Fortitude; 1d10+9 damage, and the target grants combat advantage to Brondin and his allies until the end of Brondin's next turn.

Warden's Grasp (Immediate Reaction; at-will)
Trigger: An enemy marked by Brondin that is within the burst makes an attack that doesn't include Brondin as a target. Close burst 5; Effect: Brondin slides the target 1 square. The target is slowed and cannot shift until the end of its turn.

Weight of Earth (Standard; at-will) ✦ Primal, Weapon
+12 vs AC; 1d10+9 damage, and the target is slowed until the end of Brondin's next turn.

Roots of Stone (Standard; encounter) ✦ Primal, Weapon, Zone
Effect: The burst creates a zone of rippling earth that lasts until the end of Brondin's next turn. Close burst 1; targets enemies only; +12 vs AC, 1d10+9 damage. The target is knocked prone when it leaves the zone.

Rune of Undeniable Dawn (Standard; daily) ✦ Divine, Radiant, Weapon, Zone
Close burst 3. Targets enemies only. +12 vs. AC; 1d10+4 radiant damage. Miss: Half damage Effect: The burst creates a zone that lasts until the end of Brondin's next turn. Brondin and his allies gain a +2 power bonus to all defenses while within this zone. Sustain: Minor.
Shield of Sacrifice (Minor; daily) ✦ Divine, Healing
Close burst 5. Targets Brondin or one ally in burst; Effect: The target loses one healing surge. One or two allies within 5 squares of the target regain hit points as if they had each spent a healing surge. The target and each ally who regained hit points gain a +5 power bonus to AC until the end of Brondin's next turn.
Boiling Cloud (Minor; daily) ✦ Primal, Zone
Close burst 1. Effect: The burst creates a zone of blood and grit that lasts until the end of the encounter. The zone moves with Brondin, centered on his space. Brondin and his allies have concealment while within the zone. Marked enemies that start their turns within the zone take Brondin's Constitution (+3) damage. While the zone is active, Brondin can use the Boiling Cloud Attack power once.
Boiling Cloud Attack (Standard; daily) ✦ Primal, Weapon
Close blast 3. Targets each enemy in blast and each enemy adjacent to Brondin. Requirement: The power Boiling Cloud must be active in order to use this power. Effect: The zone ends. +15 vs. AC; 2d10+9 damage, and the target takes a -2 penalty to all defenses (save ends).
Craghammer of Retribution +2
Property: Whenever an enemy scores a critical hit against Brondin, his next attack with this weapon against that enemy deals an extra +1d6 damage per plus of this item. The effect ends at the end of Brondin's next turn.
Dwarven Finemail +2
+7 AC Enhancement: +2 AC Property: Brondin gains a +2 item bonus to Endurance checks. Power (Daily * Healing): Free Action. Brondin regains hit points as if he had spent a healing surge.
Cloak of Distortion +1
Property: Brondin gains an item bonus (+1) to all defenses against ranged attacks from more than 5 squares away.
Alignment Good; Languages Common
Skills Athletics +11, Dungeoneering +10, Thievery +8
Feats Hybrid Talent, Dwarven Weapons Training, Armor Proficiency: Chainmail, Weapon Expertise - Hammer (Bonus at 5th level)
Equipment Retribution Craghammer +2, throwing hammer (2), light shield, Dwarven Finemail +2; Cloak of Distortion +1; adventurer's kit; Thieves' kit; 594gp
Rituals none

Brondin grew up within the confines of House Kundarak. His father worked with the Warding Guild and when Brondin was of age, he also joined the guild. Shortly after Brondin's father was killed in an accident, warding a loyal merchant's grand home, Brondin started having nightmares, waking from sleep drenched in sweat, raving about aberrant terrors and psychic horrors manifestations raging through Khorvaire. Known for his occasional prophetic visions, Brondin was given a period of personal leave by Lord Morrikan d'Kundarak himself, to seek out and find whether these visions are true or not. He now hunts any leads he can find, hoping to measure up to the standards imposed by Lord Morrikan and House Kundarak.

Brondin is an average sized dwarf, more towards the lean side as opposed to stout. A hereditary gene has gifted Brondin with a magnificently, perfect bald head that he is proud of beyond words. As with any dwarf, Brondin refuses to shave his beard as a sign of respect to the Forge Father, Onatar. While adventuring, he wears dusky colored chainmail armor, a light shield bearing the House Kundarak's symbol, and wields a heavy-headed craghammer. A strong defender, he likes to stomp to the forefront and lock down any enemies near him.

Brondin is usually quite jovial and not quick to temper, but when roused he is stubborn and won't back down. Prideful of House Kundarak, he won't abide any slander. If his nightmares are brought up, he will become sullen as if guilty of his own prophetic visions. Although Brondin is resolute in his loyalty to House Kundarak and himself, fighting one's own fears will truly show his measure.

Approved by Son of Meepo

Retrieved from "https://leb.fandom.com/wiki/LEB:PC:_Brondin_Hurndin_(jsb420)?oldid=8522"
Community content is available under CC-BY-SA unless otherwise noted.