Enfeebling Strike (Standard; at-will) ✦ Divine, Weapon
+11 vs AC, 1d8+8 damage, and if I marked the target it takes a -2 to attack rolls until the end of my next turn.

Lay on Hands (Minor; at-will) ✦ Divine, Healing
Melee; 1/day; One creature. Effect: Spend a healing surge, don't regain any hp, target regains hp as if it had spent a surge

Valorous Smite (Standard; encounter) ✦ Divine, Weapon
+11 vs AC, 2d8+8 damage, and each enemy within 3 squares is subject to my divine sanction.

Invigorating Smite (Standard; encounter) ✦ Divine, Healing, Weapon
+11 vs Will, 2d8+8 damage and you (if bloodied) and each bloodied ally within 5 squares regains 6 hp.

Guiding Strike (Standard; encounter) ✦ Arcane, Weapon
+11 vs AC, 1d8+8 damage and target takes a -2 to defense of my choice TENT
Divine Strength (Minor; encounter) ✦ Divine
Apply +0 as extra damage on my next attack.

Majestic Halo (Standard; daily) ✦ Divine, Radiant, Weapon
+11 vs AC 3d8+8 radiant damage. Miss: Half damage. Until the end of the encounter, any enemy that starts it's turn adjacient to me is subject to my divine sanction until the end of it's next turn.
Inescapable Longsword +1
Critical: +1d6 damage Property: Each time I miss, gain cumulative +1 to hit on next attack roll against the missed target (Caps at +1). Bonus ends if I attack a different target.
Meliorating Plate armor +1
Property: Each time you reach a milestone, increase the enhancement bonus of this armour by 1, resets after extended rest
Iron Armbands of Power
Property: Gain +2 item damage on melee attacks

Vok was born in Sharn, son of a blacksmith and a priest of the Sovereign Host, a middle-class family, having neither the political influence nor the desire to attempt a play at the upper echelon of the City of Towers. Vok's father (human) worked tirelessly at the forge and taught the young man patience and a work ethic that would steer him in his endeavors later in life. His mother (elf) turned him to the teachings of the Sovereign Host, herself devoted to Dol Dorn, god of strength and steel. She taught Vok that not all of life's problems could be overcome using words, no matter how well he could get out situations with his silver tongue. Vok learned the use of all manner of blades and different types of armour, favouring the heaviest he could wear, despite his relatively weak physical nature.

Vok himself decided to dedicate himself to the Host as well, but he found the teachings of Dol Arrah to be to his liking, and volunteered to be part of the group to work on protecting the lands from the threats of the Mournlands, joining up with the Thousand Yard Stare, attempting to bring light to the darkness of that place. After a few years there, he found that he needed to get away from this place as it was draining him of his vitality and thought a bit of crusading would help him. He also noticed that he'd developed a dragonmark during his time there, perhaps the land had bestowed this on him, he always fought to protect his allies and this mark enabled him to conduct himself better in this area. Traveling back to his home , Vok's mother suggested that offering oneself as a freelance adventuring type would yield the greatest possibilities to spread Dol Arrah's (and the Sovereign Host's) word, deeds over words. So he traveled to the Tower's Shard and is ready for some honourable adventure. 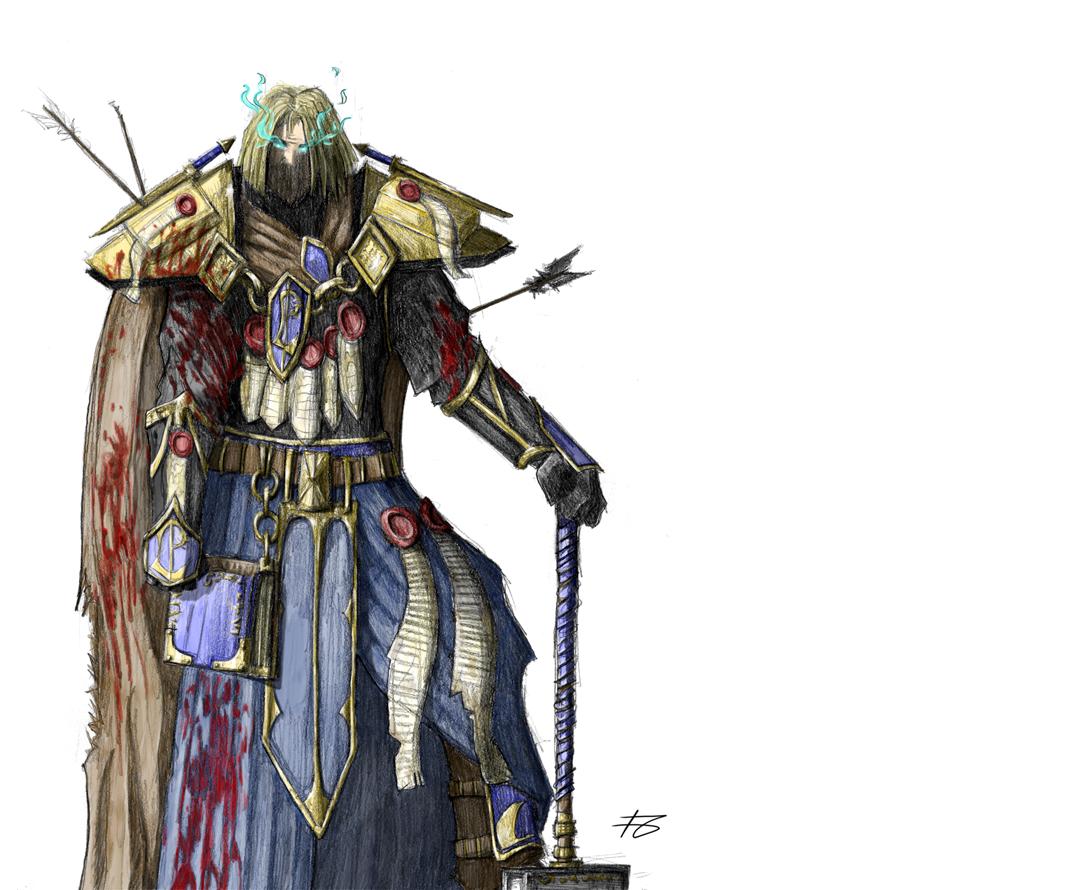 Vok is a fairly easy going individual, but the constant battles he fought in the Mournlands has drained him of some of his zest for life. He is adamantly opposed to any undead, they are an affront to the Host and must be eradicated at any opportunity. Vok is protective of his fellows, counting on his newfound mark and devoted faith in the Host to guard the lesser armoured allies.

See the Attributes template for assistance.

See the Attack template for assistance.

See the Defenses template for assistance.

See the Senses template for assistance.

See the Health template for assistance.

Make sure to link to the appropriate sources where possible.

See the Skills template for assistance.

Approved for level 4 with 3,750 XP by EvolutionKB:

All these are so tiny they are really more like suggestions than anything required. Approved as level 4 w/ 3750 XP!

Status: Approved as 4th level character with 3750 xp by evolutionkb and evilbob

Retrieved from "https://leb.fandom.com/wiki/LEB:PC:Vok_Vaerhirmana(renau1g)?oldid=7200"
Community content is available under CC-BY-SA unless otherwise noted.