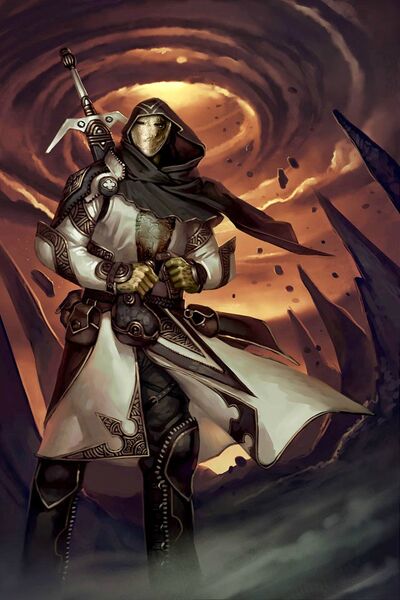 Avenging Shackles (Standard; At-will) ✦ Divine, Implement, Radiant
Target:One creature Ranged 5, +6 vs Will: 1d8+4 radiant damage, and if the target is subject to my Oath of Enmity it is slowed until the end of its next turn.

Oath of Enmity (Minor; Encounter) ✦ Divine
Target: One enemy you can see in the burst.

Close Burst 10. Effect: When Khazin makes a melee attack against the target and the target is the only enemy adjacent to him, he makes two attack rolls and uses either result. This effect lasts until the end of the encounter or until the target drops to 0 hit points, at which point he regains the use of this power.

Sohei Flurry (Minor; You must have hit an enemy with a weapon attack this turn; Encounter) ✦ Divine, Weapon
Target: One creature Melee, +11 vs AC: 1d12+6 damage.

Fury's Advance (Minor; Encounter) ✦ Divine, Weapon
Target:One creature Melee, +11 vs AC: 1d10+6 damage. Khazin pushes the target 1 square, and it takes 3 damage for each of his allies adjacent to it after the push. He then shifts 1 square to a square adjacent to the target.
Iron Mind (Immediate Interrupt when Khazin is hit by an attack; Encounter)
Khazin gains a +2 bonus to all defenses until the end of his next turn.

Channel Divinity: Abjure Undead (Standard; Encounter) ✦ Divine, Implement, Radiant
Target: One undead creature in burst Close Burst 5, +6 vs Will: 3d10+4 radiant damage, and Khazin pulls the target 5 squares. The target is also immobilized until the end of Khazin's next turn.
Channel Divinity: Divine Guidance (Immediate Interrupt when An ally within 10 squares of Khazin makes an attack roll against Khazin's Oath of Enmity target; Encounter) ✦ Divine
Target: The triggering ally Effect: The target makes a second attack roll and uses either result.
Distracting Flare (Move; Encounter)
Khazin becomes invisible and moves his speed. He is invisible until the end of the movement.

Aspect of Might (Standard; Daily) ✦ Divine, Weapon
Target: One creature

When the Gatekeepers repelled the Daelkyr Invasion of Eberron and sealed the remnant of Xoriat's forces in the depths of Khyber, it was necessary to send groups to every corner of the planet, to search for points at which the remaining Daelkyr might attempt to force their way back from Khyber to the surface. Of the Githzerai who live on the Material Plane, a majority live in small communities founded during this effort to contain the Daelkyr. The Gith, survivors of the destruction of their homeworld at the hands of the Daelkyr, had good reason to assist the Gatekeepers in this task, and relished the opportunity to prevent a repetition of their tragedy.

Khazin (ħa-TZEN) was born in one of the Githzerai communities pledged to maintaining part of the system of wards against the Daelkyr of Xoriat in Khyber, in particular the enclave under the Tashana Tundra in northern Sarlona. Like all of his contemporaries, he was raised with a distinct awareness of the past, taught by example to always be mindful of his peoples' hardship, of the importance of their freedom from the mad and tyrannical daelkyr and illithids, and of the importance of eternal vigilance.

As a boy, he was separated from his unit during his first assignment, a routine scouting detail. He was briefly lost in the tunnels of Khyber, and narrowly escaped a detachment of dolgrims with a dolgaunt (sure evidence of illithid presence). When Khazin found his way back to the enclave, exhausted and frightened, he found his return met not with gladness and indignation at his assailants, but with cold suspicion. His people could not be sure that he had not been made an unwilling spy for the illithids and their masters, and so he was turned away.

Khazin fled the dark. He wandered Sarlona, avoiding the antagonistic Riedran patrols, scraping out a thin existence by foraging and a little theft. Githzerai are reclusive, little known, and vulnerable- Khazin began to wear his mask to reflect his divorce from his heritage and preserve the gith's secrecy. He slowly made his way to the border of Adar. He had not come there by accident, or on a whim. Adar was well known as the only serious resistance to the Inspired's regime in Sarlona, and after Khazin's rough treatment at the hands of Riedra's military, Adar seemed the natural goal of his meandering pilgrimage.

The kalashtar, more beautiful than any of Sarlona's inhabitants, took him in. They were kind, asked few questions, and took no notice of his strange appearance. They taught him about the Dreaming Dark and the Path of Light- their philosophy slaked Khazin's thirst for meaning in life, parched as he was in the wake of his own peoples' rejection. He could not become a new person, but he found new purpose. The kalashtar crafted a new mask for him to replace the crude thing he had made on the run, a mask that would reflect his new identity. Most of the kalashtar follow the Path of Light conventionally, seeking to bring about the end of il-Lashvatar, the Darkness that Dreams, and move the regenerative cycle of the world from darkness to light by promoting and acting on behalf of good. Khazin joined a small number of kalashtar who seek to bring about the end of the age of Darkness by eliminating those who work to preserve it, the Dreaming Dark. He became a practitioner of Sheshan talarash dasyannah, the Path of Shadows, a martial art form peculiar to the kalashtar that weaponizes the artistic dance practiced by followers of the Path of Light. The divine might of il-Yannah, the Great Light, is profoundly evident in the way Khazin moves and fights so gracefully with a weapon so beyond his physical strength.

Khazin is in Sharn to investigate rumors of attempts by the Inspired to expand to Khorvaire.

Khazin has a full head of hair, unlike most githzerai, and it's thin, black, and about 5 inches long. He has a very thin frame, though the cloaks he wears often conceal it. His hair and his enormous sword are just about the only two features that Khazin does not conceal- he wears a mask in public, which is unmarked but is fairly noteworthy in its own right.

Khazin is usually silent and ostensibly stoic, but this is only a habit he picked up among the Kalashtar. Inwardly his emotions are tempestuous, and he tends to feel very strongly about anything about which is has any opinion at all. These broiling emotions are mostly negative- anger, resentment, indignation- and Khazin releases this tension dancing the Path of Shadows. Khazin's good moods are far more placid and meditative. Khazin is tragically humorless.

Khazin wants to crush the Dreaming Dark, bring enlightenment to those around him, and find some equilibrium in his own sense of identity. He doesn't really wear his mask to hide his race- he wears it to bury his confusion about who he is.

Retrieved from "https://leb.fandom.com/wiki/LEB:PC:Khazin_(WEContact)?oldid=9430"
Community content is available under CC-BY-SA unless otherwise noted.