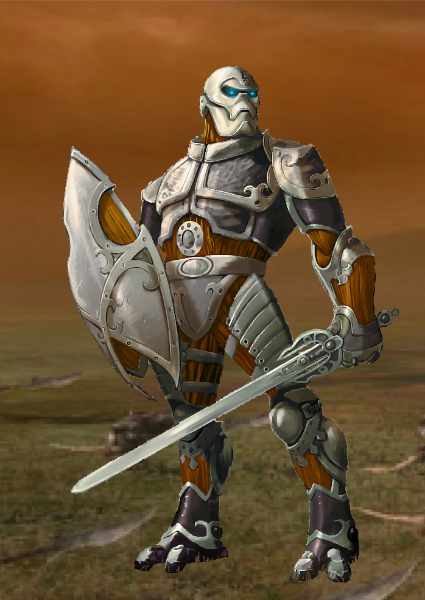 Furious Smash (Standard; at-will) ✦ Martial, Weapon
+12 vs FORT; 4 damage, then choose one ally adjacent to either you or the target. This ally applies a +3 bonus to the attack roll and the damage roll on his or her next attack against the target. If the ally does not attack the target by the end of his or her next turn, the bonus is lost.

Warlord's Strike (Standard; encounter) ✦ Martial, Weapon
+12 vs AC, 2d8+5 damage, Until the end of your next turn, all of your allies gain a +4 bonus to damage rolls against the target.

Myrmidon Formation (Standard; encounter) ✦ Martial, Weapon
+12 vs AC, 2d8+5 damage, At the start of your next turn, each ally adjacent to you gains 5 temporary hit points.

Inspiring Word (Minor; encounter) ✦ Martial, Healing
Range: Close Burst 5
Crush can use this power twice per encounter, but only once per round. Targets self or one ally in burst. The target can spend a healing surge and regain an additional 2d6+3 hit points.

Inspired Belligerence (Minor; encounter) ✦ Martial
Range: Close Burst 5
Target: One enemy in burst granting combat advantage to you or an ally
Until the start of your next turn, all your allies gain combat advantage and add +3 to damage rolls against the target.
Warforged Resolve (Minor; encounter) ✦ Healing
Crush gains 6 temporary hit points and can make a saving throw against one effect a save can end that deals ongoing damage. If Crush is bloodied, he also regains 6 hit points.

Battlefront Shift (No Action; encounter) ✦ Martial
Range: Close Burst 3
Target: You or one ally in burst; Trigger: You roll initiative; Effect: The target shifts half of his or her speed.

Fearless Rescue (Immediate Reaction; daily) ✦ Healing, Martial, Weapon
+13 vs AC, 2d8+5 damage, Triggered when an enemy within 5 squares of you reduces an ally to 0 hit points or fewer. Before the attack, you can move to the nearest square from which you can attack the target. The ally can spend a healing surge and regains an additional 1d6 hit points for every opportunity attack you provoke while moving to the target.

Stand the Fallen (Standard Action; daily) ✦ Healing, Martial, Weapon
+12 vs AC, 3d8+5 damage. Effect: Each ally within 10 squares can spend a healing surge and regain 3 additional hit points.
Summoned Drakescale Armor +2
Power (At-Will): You banish this armor to a secure extradimensional location. At any point in the future, unless you are wearing armor, you can use another minor action to recall the armor. The armor appears on you as though you had donned it normally.
Vengeful Longsword +1
Critical: +1d6 damage Power (Encounter): Free Action. Use this power when an attack hits a bloodied ally within 10 squares of you. Gain a +2 power bonus to attack rolls and +1d10 on damage rolls with this weapon against the attacker until the end of your next turn.
Heavy Shield of Deflection
'Property: You gain resist 2 to all damage from ranged attacks and area attacks.
Distance Handaxe +1
Property: Increased normal range of 5 squares and long range of 10.
Amulet of Protection +1
Property: +1 enhancement bonus to Fort, Ref, and Will
Adamant's Unshakeable Stance (Boon Equivalent to Spiked Soles)
Property: You gain a +5 bonus to Athletics checks for climbing. Power (Encounter): Immediate Reaction. Trigger: You are hit by an effect that pushes, pulls, or slides you. Effect: You ignore the triggering forced movement. You are slowed until the start of your next turn.
Amulet of Protection +1
Property: +1 enhancement bonus to Fort, Ref, and Will
Inspiring Presence
When an ally who can see Crush spends an action point to take an extra action, that ally also regains 8 lost hit points
Battlefront Leader
Gain proficiency with heavy shields and use the Battlefront Shift power.
Warforged Resilience
Crush has a +2 racial bonus to saving throws against ongoing damage. Also, when making a death saving throw, hecan take the better result of your die roll or 10.
Unsleeping Watcher
Crush does not sleep and instead enters a state of inactivity for 4 hours to gain the benefits of an extended rest. While in this state, Crush is fully aware of his surroundings and notices approaching enemies and other events as normal.
Living Construct
Crush is a living construct. He does not need to eat, drink, breathe, or sleep. He never make Endurance checks to resist the effect of starvation, thirst, or suffocation. All other conditions and effects affect him normally.
Alignment Good; Languages Common
Skills Athletics 10, Diplomacy 11, Endurance 10, Intimidate 15
Feats Improved Inspiration, Inspired recovery, Armor Proficiency: Scale, Level 5 to-hit bonus, Improved Inspiring Word
Equipment Summoned Drakescale Armor +2; Heavy Shield of Deflection; Vengeful Longsword +1; Distance Handaxe +1; Amulet of Protection +1; Belt Pouch; 2 sunrods

“I remember little of my creation. My first real memory is being sold to the Cyran military by the House Cannith artificers who forged me. I spent the first twenty five years of my life as a soldier in the waning days of the last war.”

“The Cyran generals quickly recognized my tactical ability, as well as something else: the ability to strike fear into the hearts of men, beasts, and living machines. They said I had ‘leadership potential,’ promoted me to the lieutenancy of a Special Forces warforged strike squad. I got what I wanted out of my fellow constructs, whether it took the threat of double guard duty, or the promise of an acid bath and dismantlement, I said and did whatever was necessary to exact obedience and win battles.”

“Initially my squad directed our attacks at Valenar. Can’t say I much regret killing elves, even to this day. Wild, bestial things they are. Intractable, unruly, and violent. My squad staged many a successful cross-border raid, seriously damaging their precious cavalry stables, and taking the heads of many elf warriors.”

“As the plight of Cyre grew more desperate though, we were relocated to the Thranish border in the final years of the war. There we led raids aimed at the harassment and destruction of men. Can’t say that I’m particularly proud of the things we accomplished there, but I did my duty. It was, after all, the purpose for which I was built.”

“Then came the deadly mists of the Mourning. I remember clearly the day it happened. My squad was fighting a provincial Thranish militia that had launched a retaliatory attack across the Cyran border, when we saw the cascade of terrible vapors approaching. Both sides began to flee as we realized our imminent danger. Just when we thought ourselves out of harm’s way however, a horrible aberrant beast emerged from the ground. A savage thing it was, with waving tentacles and a gaping maw full of fangs. Perhaps it too was driven out by the mists, or perhaps it was drawn to the suffering inflicted by the Mourning. But whatever its reason for being there, it took the opportunity to feed on human flesh and wreak destruction on my squad.”

“Though both forces put aside their differences to battle the new common enemy, the beast tore through our ranks with ease, quickly decimating the Thranish forces. My warforged were able to hold out longer, but we were clearly outmatched as well. The beast’s tentacles were everywhere, and it was difficult to keep track of the creature’s movements, as though time and space were distorted by the foul thing’s mere presence. While frantically trying to inflict some damage to the creature’s midsection I was dealt a grievous blow that nearly severed my legs from my body. Unable to move, and fading in and out of consciousness, I could only watch as my comrades were felled one by one. The last thing I remembered was seeing the beast lunge forward to swallow Sergeant Khopesh whole.”

“I woke several weeks later lying next to a smithy’s forge. I had apparently been rescued by Saali, a Thranish priestess of the Silver Flame. She told me the tale of how the creature that had very nearly ended my life, the balhannoth, had also devastated several nearby Thranish villages. She had been charged with helping to rescue survivors, bringing them back to her chapel’s infirmary. Unable to tend to me in the infirmary though, she had instead brought me to the local blacksmith, who, with the help of a talented artificer gradually refurbished my legs one joint at a time. The entire process took several months, and Saali visited frequently to watch over my recovery. Though she could not provide material succor in the form of food, she would often help me oil my bearings and exercise my damaged joints. Sometimes she would simply sit and read to me from the Annalects of the Flame.”

“I can’t say that I was much impressed with Saali’s religious ministrations. I’ve never seen much evidence of gods or so-called ‘divine forces’ doing good in this world. I must admit though that I deeply appreciated the company. More than that, I was fascinated by Saali’s patience and resolution, her dedication to her beliefs, and her honest desire to make this world a better place. See, I never before put much stock in the emotions my human creators imbued me with. My stock in trade was fear. Fear wins battles, I thought. If I could make my enemies and my underlings fear me, and I had a decent head for tactics, I’d be unstoppable in the field. But the Mourning proved me wrong. If I’d been more aware of my troops, and better able to drive them to true heroism, maybe more of them would have survived that horrible encounter with the balhannoth.”

“It’s inspiration and compassion we need from our leaders to win the coming battles that are worth winning. I pledge here and now to be one of those leaders. With the right friends by my side, I’ll do my part to ensure that there never is another Mourning.”

Crush is tired of being a weapon, a mere pawn in the games of Machiavellian rulers. As such, he refused to subjugate himself even to Thrane's theocratically-governed military, though they claim to seek the destruction of evil. He is seeking instead to use his tactical gifts, leadership, and combat abilities to do some good in the world, and restore peace to troubled lands. To this end he has traveled to the Brellish city of Sharn in search of similarly free-spirited, and nonconformist adventurers with whom to strike a blow for peace, while hopefully earning a living in the process.

Crush's eyes glow with a deep blue light that flares to white when he experiences deep emotion. Unlike many warforged, he eschews the addition of weapons and tools in place of the body parts he was forged with, believing that he is better able to motivate, connect and reason with organic humanoids if he maintains an appearance that they find less outlandish.

Alignment: Good
Crush has a more upbeat take on life since getting his knee fixed and winning the Race of the Five Horns and being honored by the city of Sharn. He's more confident about his ability to negotiate the complexities of civilian life and more hopeful that he can strike a true blow for peace and justice. He's still deeply suspicious of politicians and elves though, and in desperate times he's likely to fall back on his ruthless military demeanor.

You didn't include the point cost in your attribute section, but I fixed it for you. I assume you put the 8 into dex and then raised it to a 10 with 2 pts(you start with 22).

You need to add the range of inspiring word.

Just some advice: You might be better off grabbing a couple heavy thrown weapons(like javelins), instead of the hand crossbow. You have a higher hit rate and better damage too.

Status: Approved as 4th level character with 3751 xp by EvolutionKB and [[User:renau1g|renau1g]

Retrieved from "https://leb.fandom.com/wiki/LEB:PC:Crush_(pacdidj)?oldid=7807"
Community content is available under CC-BY-SA unless otherwise noted.