Form of Winter's Herald (Minor; daily) ✦ Cold, Polymorph, Primal
Effect: You assume guardian form of winter's herald. While you are in this form, you gain +1 bonus to AC and resist 5 cold. In addition, each square within 2 squares of you, wherever you move, is difficult terrain for your enemies.
Standard Action
Close burst 1; all enemies in burst; +11 vs AC; 1d10+5 cold damage and target is immobilized TENT.

Warforged Resolve (Minor; encounter) ✦ Healing
Gain 5 temporary hit points and can make a saving throw against one effect a save can end that deals ongoing damage. If bloodied, regain 5 hit points.

Earthgrasp Strike (Standard; encounter) ✦ Primal, Weapon
+11 vs AC, 1d10+5 damage, and target cannot stand up 'till the end of Cairn's next turn and when it stands up before the end of the encounter it takes additional 1d10+5 damage.

Wellspring Strike (Standard; daily) ✦ Healing, Primal, Weapon
Close burst 2 target each enemy in burst; +11 vs. AC; Hit: 1d10+5 and ongoing 5 damage (save ends); Miss: Half damage; Effect: Until the end of encounter, Cairn gains regeneration 5 while bloodied. At the start of each of his turns, he can forgo regaining 5 hp to allow a bloodied adjacent ally to regain them instead.

Guided Strike (Immediate Interrupt; encounter)
Close burst 10 Trigger: An ally withing 10 squares misses with an attack against AC. Target: The triggering ally in the burst. Effect: Target's attack is made against Reflex instead of AC

Mountain Stature (Standard; encounter) ✦ Primal, Weapon
+11 vs AC, 1d10+5 damage and the target(s) are pulled 2 or knocked prone at Cairn's discretion. Target: One or two creatures. Special: reach is weapon +1 (3 for halberd)

Guardian's Counter (Immediate Interrupt; encounter)
Close burst 2 Trigger: An ally withing 2 squares of Cairn is attacked and Cairn is not the target of the attack Effect: Cairn and the target shift up to 2 squares swapping positions. Cairn becomes the target. After the attack is resolved, Cairn can make MBA against the attacker.
Frost Fury Halberd
When wielder is bloodied, weapon does +4 cold damage on hit

"For years before The Day of Mourning there were battles across Cyre. It is called The Last War. I wouldn't know. All I know is The Day of Awakening. However, I am told the history of the place of my awakening. Told by mortal woman, a Cyran hero, never to be sung about and her dead companions."

Apparently, independent group working for Cyre military was employed when something needed to be done outside the area controlled by Cyre. As most of the fighting went INSIDE Cyre, some of these tasks were simply to recover things, persons or even territory lost to other military forces. The group was called "Green Fingers" and there were five of them. They maintained semi-secret hideout, high on the Seawall Mountains, near the spring of Torlaac River. Party druid and both fey enjoyed unspoiled nature while their dwarven companion enjoyed the mountains, while their machine slave warrior obeyed orders. The Lady mage didn't particularly like the place, but she kept them company and in time, inscribed rune circle connecting her to Cyran Capitol. They even made a cairn at one point where elements met. Mountain, spring and altitude combining earth, water and air. Only fire was missing, but it's opposite was quite present.

As the War dragged on occasional raiding party of fleeing homeless, roving bands of goblinoids or deserter groups would stumble upon mountain abode and, despite warnings and security measures, would settle there. Wary adventurers fed them or fought them if they were present, but evicted every last one of them upon return.

One day, whole tribe rebelled Darguun Hobgoblins appeared, led by their shamans and warlock and helped with lesser creatures of their wild lands. On that day, three fingers were lost although lady seemed to regret the death of only one of them, elven druid. They prevailed, by at great cost. Dwarf named Falkrunn and warforged Defender AX 17 called Tank were buried with small tombstones, but for the druid, Illian Brightsnow, the cairn on the primal powernode was used as tombstone. Their weapons were laid with them and the house all but abandoned. Lady would seek solitude occasionally, but without her companions, the house wasn't safe anymore.

At that faithful day, Lady Mage and her eladrin companion returned to remember, exactly one year after the deaths of their companions. They found new companions, but never again would Green Fingers fight together. They were ambushed by (maybe same tribe) hobgoblins and killed after inflicting severe losses to savages. Fey warlock fell with the curse on his lips and Dol Arah priest reinforced it with his last breath. It seemed nothing could stop the horde. The Lady was captured by their leader, bound and gagged, she awaited terrible destiny.

Victors plundered the corpses of the defeated and then somebody noticed relatively fresh graves. They opened one and found remains of terribly disfigured warforged. Shield and axe were laid along him. Another, and skeleton of a dwarf was found along with his gleaming halberd.

Small tremors started unnoticed in commotion. Finally, under the cairn preserved corpse of an elf was dug out. The tremors increased and now nobody could ignore them.

Then terrible sound came, moaning, rumbling, earth trembled and fiercely cold winds rose. The blood of the priest and warlock mixed and seeped into the cairn while spirits of dead warriors rose from their graves. In the storm that they were drawn toward cairn and it moved. Sides split to form hands, bottom split and formed legs while parts from upper portions fell and moved. Cairn roared in agony of birth and terrible need: KILL, SLAY THE INTRUDERS, DEATH TO DEFILERS OF THE GROVE!! PROTECT YOUR GROVE! The stone grabbed first weapon available, that halberd held by hobgoblin warrior.

Runes in primordial name this weapon as Ghalad Zar, Frozen End of the World (or simply Dark Ice depending on translation).

This weapon is halberd crafted from what seems to be black ice. Inside the blade is brilliant white liquid which cracks with white lightning when wielder is bloodied and radiates pale white glow. Weapon’s hilt is white dragon bone and it ends with blue gem shaped like an eye. Runes are written along the axe blade: 'Ghalad Gar', frozen end of the world, frozen end of life and death’. Sensitive people can detect holy aura emanating from the blade.

Used by former paladin Egla the Icehorn of Green Fingers, special agents of Cyre before The Mist, this halberd was his monument after the battle with hobgoblins. It was taken by Cairn after his awakening.

OOC: Suggesting: History 25 or Arcana 30 (five less for characters from Cyre) to recognize the weapon

Battle was short and bloody. Mist clung to everything, spirits of the dead vied for attention and tried to control new stone entity. It had strange, primal mind and it resisted them. After another battle, this one invisible, they settled down in uneasy truce and Cairn moved again to help The Lady. She seemed drained, not that Cairn recognized it, but spirits inside did.

He took some provisions, slung halberd over his shoulder, took The Lady in his arms and started walking. Unfortunately, he choose wrong side and descended into the Mists even as the echoes of catastrophe died down and everything settled back to 'normal'. In Mournlands, spirits of warforged warrior, elven druid, eladrin warlock and dwarven avenger talked, taught and fought. Cairn walked tirelessly, Lady Mage in his hands. He stopped few times to take care of her biological needs, he fought off the things better left unnamed and walked on. His 'skin' got infused by psychic energy left from the catastrophe, channeled by active spirits within. He listened to The Lady of her exploits and of The Last War, stories of hardship and camaraderie, of luck and narrow escapes, he listened and did what he could for her in this harsh land. Yet, she was pining despite his best efforts.

Finally, one day he found the mist again and emerged out of Mournland. In his hands he carried dead woman and in his heart her dead companions. He buried her as best as he could, pinned her charm on his chest as a sign of membership and honoring her memory and continued his walk until he found a settlement. His appearance would elicit alarm in simple people he met, but his docile nature would soon put them, well not at ease, but to acceptance.

Cairn is searching for 'his grove', place he could call his own and protect and friends such as his teachers had.

Cairn looks like big stone boulder, earth elemental of some sort. His face is featureless, cold blue eyes are clearly visible when he is excited, otherwise they are light gray and barely visible. 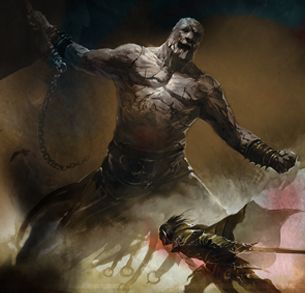 Cairn has only started to develop personality as he is essentially newborn. He is prone to childlike curiosity, mostly he is unaware of social nuances and is very gullible. He will generally believe everything said to him if at all plausible. He has some knowledge gained while the spirits of dead warriors were active within him while he walked through Mournland, but not much. He is slow to anger, but once started his fury is frightening to behold.

He will always try and help 'fleshlings' or 'live ones', but sometimes his advice and/or take on things could be little off (i.e. someone asks for help in cutting down the tree and he stops the cutting or someone suggests recovering something from Mournland and he wonders why can't they just go there)

He is (for now) unaware of differences between fleshy undead and live people and may have trouble seeing goblinoids as peaceful or friendly.

Internally, he is torn between four spirits and their beliefs, by two opposing gods: Dol Arrah and The Devourer. When asked about his beliefs he will say he is nature's warrior and let them draw conclusions. He didn't make a decision to follow any particular deity of The Host or of Six.

Warforged do not "automatically save vs. death". They get the better of their roll or 10. While this means that they almost always save because of this, that doesn't make it automatic. There are a few effects in the game that can give you a penalty to saves, in which case that auto-10 is NOT a successful save. Please update this in all racial feature sections.

These are both minor things, soooo....

I echo the sentiments of Kalivdrev. You've got a 25 pt buy. LEB uses 22. You forgot the proficiency bonus on all your attacks(should go in the equipment line)

Appoval as a level 2 character by EvolutionKB

The only thing I see is you hp in the health section is off. The summary is correct though. Minor so approved. EvolutionKB

Status: Approved as 4th level character with 3750 xp by Kalidrev and EvolutionKB

Retrieved from "https://leb.fandom.com/wiki/LEB:PC:Cairn_(Neurotic)?oldid=8867"
Community content is available under CC-BY-SA unless otherwise noted.